Mars Chocolate announced during a celebratory evening event in the UK, on 26 June 2014, that Mondi Solec has won their prestigious Quality Focus Initiative award (QFI). The award recognises outstanding performance in 2013 and is based on the excellent quality and service provided by Mondi’s dedicated Mars Team throughout the year. 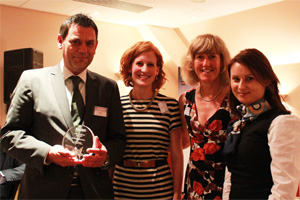 “This award demonstrates the fantastic work underway in Mondi Solec and the strength of our partnership with Mars Chocolate,” says Stefan Hoffmann, Head of Key Account Mars Inc in Mondi Consumer Good Packaging, who attended the ceremony. “Mondi Solec is one of the leading suppliers for Mars Chocolate in Europe and we can all be proud of this achievement,” adds Stefan.

Mars Chocolate launched the Quality Focus Initiative a few years ago to challenge its packaging suppliers to demonstrate their highest levels in quality performance. Mondi Consumer Good Packaging provides flexible packaging solutions for major Mars brands such as ‘Snickers’, ‘Mars’ and ‘Bounty’. Mondi Poznan won this award in 2013 and Mondi Solec also won this award in 2012.