As individuals seek to buy and store food for longer during the pandemic, it's worth looking at the role packaging plays in mitigating food waste. Data shows 1.3 billion tonnes of food is wasted every year. That’s one third of the world’s food, enough to feed two billion people - more than the combined population of Europe and Africa*.

Reducing food loss and waste is also critical in the fight against climate change. Yet, it’s an issue that is often overlooked. When we throw away our leftovers, it’s not just food we’re wasting, it’s our resources too.

The production of food lost or wasted not only accounts for seven per cent of greenhouse gas emissions globally, but also uses 30 per cent of the world’s agricultural land and six per cent of total surface and groundwater withdrawals.

We all have a role to play - waste occurs throughout the value chain. In the developed world it is most prominent during consumption, with around 52 per cent of European food loss and waste occurring with consumers, restaurants and caterers.

As we look to address this issue and mitigate the problem, sustainable packaging can play a vital role. It can reduce the environmental impact of the food industry by preventing food from spoiling before it reaches the table. This is required now more than ever.

During handling and processing, food is often lost due to temperatures not being optimal, inadequate protection of delicate produce, and wrong size or damaged packaging. However, the right packaging provides barriers against moisture and gases, preventing spoilage, as well as protecting food from physical damage as it is transported.

*All data sources are referenced in the Mondi food waste infographic

As part of our commitment to the UN Sustainable Development Goals (SDGs), Mondi is developing packaging solutions that help to reduce food loss and waste at each stage of the value chain. As we limit our movements to protect society during this pandemic, protecting our food supply is more important than ever. Mondi is contributing by supplying fit-for-purpose packaging that is sustainable by design and helps to minimise food waste all the way from farm to fork. As individuals, we can also play our part by minimising the food we throw away through better understanding of portion control, being more aware of the role of best before dates and ensuring food is stored in the appropriate environment.

Mondi is a global leader in packaging and paper, contributing to a better world by making innovative, packaging and paper solutions that are sustainable by design. Our business is fully integrated across the value chain – from managing forests and producing pulp, paper and plastic films, to developing and manufacturing effective industrial and consumer packaging solutions. Sustainability is at the centre of our strategy and intrinsic in the way we do business. We lead the industry with our customer- centric approach, EcoSolutions, where we ask the right questions to find the most sustainable solution. In 2019, Mondi had revenues of €7.27 billion and underlying EBITDA of €1.66 billion. 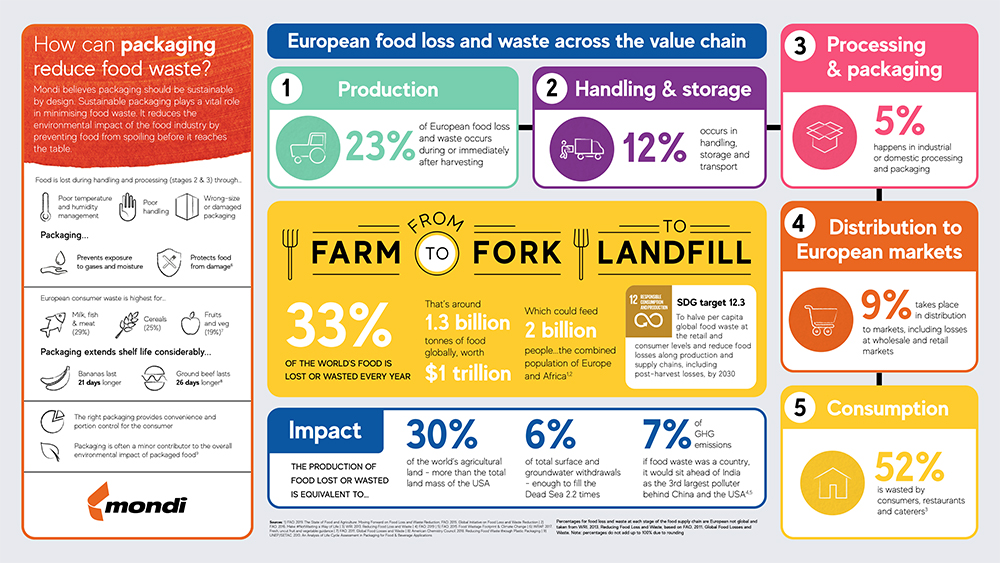 Mondi recognised for industry leading sustainability reporting by The World Business Council for Sustainable Development for third year in a row
Read more
Hi! We would like to use cookies and other tracking technologies to improve your experience on our website. To explore our site with cookies please click ‘accept’. You can also customise your settings.
For more information, please see our Privacy and Cookie Notice.
Back to top
Contact us