Why does one third of the world’s food never make it to the table and how can packaging help?

It’s not unusual in the Western world to throw away leftovers and discard slightly damaged food without a second thought. Yet when we consider that 135 million people face acute food shortages, it is clear that food waste is an issue we can no longer afford to ignore.(1)

In a year when COVID-19 is disrupting supply chains and causing further food loss, it is fitting that 29 September marks the first ever International Day of Awareness of Food Loss and Waste. A moment for the world to take stock of the way our food is produced, distributed and consumed.

Food waste campaigner Tristram Stuart has said, “Cutting food waste is a delicious way of saving money, helping to feed the world and protect the planet.”  He’s right, confronting food waste is critical to the health of people, the planet and business. It’s staggering that two billion people could be fed with the 1.3 billion tonnes of food that is lost or wasted every year – the combined population of Europe and Africa.(2) In places like Europe almost half lost is at the consumer end of the supply chain, while in developing countries a significant proportion of post-harvest food is wasted. Regardless of location, these high losses are mainly due to lack of proper storage, improper handling and inadequate packaging.(3)

When we waste food, we also waste the resources that were used to produce it, whether that’s water, energy, land or capital. According to the FAO, the production of food lost or wasted accounts for 7 percent of greenhouse emissions globally, meaning that it would sit ahead of India as the third largest polluter if it were a country.(4) We’re also wasting 30 per cent of the world’s agricultural land and six per cent of total surface and groundwater withdrawals, at a time when one in three people across the world don’t have access to safe drinking water.(5) It’s time to place more value on the food we consume.

At Mondi, a big focus is on packaging solutions that are sustainable by design and reduce the risk of bruising and other damage to food as it is transported to consumers. This is a critical loss point for fresh fruits and vegetables in particular, largely owing to inadequate bulk packaging.(6) As we see a rise in e-grocery, this is only going to become a greater issue.

For example, research by Mondi and the Aegean University into the shelf life of tomatoes has proven that corrugated packaging is most effective for maintaining quality and limiting loss of tomatoes, compared to both plastic and wooden trays. The study looked at the impact of different packaging materials on both the weight and hardness of tomatoes, as well as more visible mechanical damage. All of these factors negatively impact appearance and the likelihood of a consumer purchasing and/ or eating the product.

Coral Tray is a new packaging tray made of 100 percent recyclable cardboard for transporting fresh produce like tomatoes. It balances the ability to see the fresh product, which is key for consumers, with stability for stacking and protection for the product. As our client BIOhof Kirchweidach has described, “Due to the stability of the packaging, the product is extremely well protected against damage. It also eliminates the risk of the tomatoes being bruised in the shopping basket or on the way home. The air holes reduce the risk of mould forming and prevent condensation from forming, which often happens with plastic packaging.” 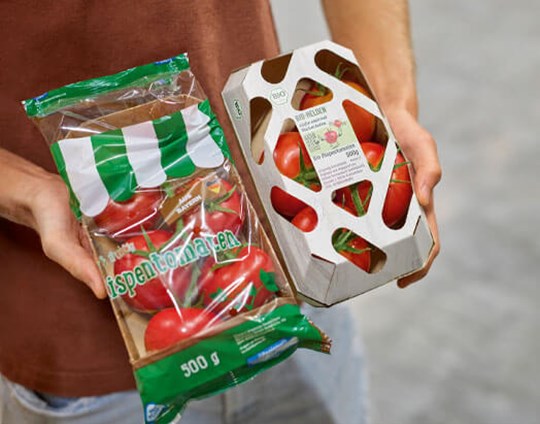 Optimising a product’s shelf life is a key priority for our customers and the right packaging keeps food fresh for longer. Clever packaging solutions not only prevent spoilage by inhibiting exposure to gases and moisture through their barrier properties, they can help consumers buy the right amount, providing convenience and portion control.(7)

There is no single force that can solve food loss and waste in its entirety: social, political or corporate. It’s only through collaboration between governments, businesses and individuals that change is going to happen. When it comes to preventing food from spoiling, the packaging industry can play a key role at all stages of the supply chain.

Plastic waste and the impact of excess packaging on the planet is an ongoing concern. Consumers are increasingly making environmentally conscious choices about the products they buy. Packaging is part of this yet it is still expected to provide convenience, a long shelf-life, and visual appeal.  This means designing packaging with recycling front of mind, replacing less sustainable materials and reducing our carbon footprint. 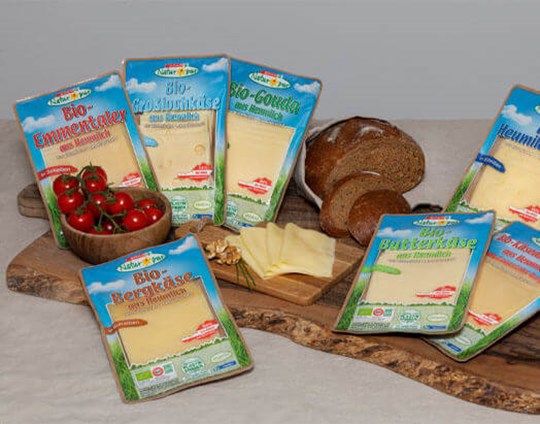 In Europe, consumer waste is highest for meat, fish and milk, accounting for 29 percent of food wasted. This is often caused by poor meal planning, excess buying, confusion over labels (best before and use by) and poor in-home storage.(8) These products require packaging with the essential barrier properties of plastic to keep them fresh for longer. With PerFORMing removable we have developed an 80 percent paper-based solution for cold meats and cheese. This innovative packaging combines the relative benefits of paper, including being a renewable resource with higher recycling rates than other packaging materials, with a thin plastic coating that extends shelf life and avoids waste. The shallow paper tray has a fully removable plastic layer that can easily be separated allowing the paper tray to be 100 percent recyclable across Europe, and resulting in 70% less plastic used and a 70% reduction in CO2 compared to a plastic tray.

It’s clear that the packaging industry has a key role to play in mitigating food loss and waste. The foremost function of packaging is to protect what is inside, during production, storage and transportation. If this is not the case, the resources used in producing both the food and the packaging itself will be wasted.

By partnering with customers using our EcoSolutions approach, we are able to create sustainable packaging that is fit-for-purpose. At the heart of this is asking the right questions across the value-chain from retailers to recyclers to balance the needs of business, product and planet - using paper where possible, plastic when useful.

More innovation is needed if we are to simultaneously reduce food loss and waste, conserve resources and reduce the impact of packaging on the planet, and we are constantly exploring new ways to do this. We can’t do it alone, and as COVID-19 disrupts supply chains and economies around the world, warnings of a looming food crisis in its wake become louder. It is therefore more important than ever that we work together – as manufacturers, brands and consumers - to find solutions to stop food waste and address food insecurity for the long-term benefit of everyone.

WBCSD ranks Mondi among top 10 sustainability reporters globally for the fourth year in a row
Read more
Hi! We would like to use cookies and other tracking technologies to improve your experience on our website. To explore our site with cookies please click ‘accept’. You can also customise your settings.
For more information, please see our Privacy and Cookie Notice.
Back to top