Will digital be the rebirth or death knell of UK manufacturing?

Today Peter Oswald, CEO Mondi Group, spoke at the FT Future of Manufacturing Summit in London on whether digitalisation will be the rebirth or death knell of UK Manufacturing?

Here are his views on the matter.

Does manufacturing matter any longer?

Today, UK manufacturing accounts for about 10% of GDP and jobs compared to the average for developed countries of 13%. However, its relevance for the economy goes beyond this.

Secondly, manufacturing is a key component of the Current Account Balance.

The UK has a worrying Current Account Deficit of about £90bn or close to 4% of GDP. This puts it 57th in the 2019 IMD World Competitiveness Ranking, below countries such as Greece, Ukraine, Turkey and Colombia. The commercial services surplus of £120bn  does not compensate the trade deficit of £170bn.

While the UK is perceived as a service economy, industry exports are about 20% higher than service exports.

So while the strategy of the UK should, and must be, to further strengthen its services sector, especially the financial sector, I have serious doubts that the UK can even come close to a balanced Current Account without making progress in its Manufacturing Sector.

So in summary, manufacturing does matter.

The biggest challenge for UK manufacturing is productivity.

The wealth and wellbeing of any nation depends foremost on its productivity. It was the phenomenal rise in productivity in the clothing industry at the end of the 18th century, which led to the global industrial leadership of the UK in the 19th century.

Today, the overall productivity of the UK is only average. According to the IMD World Competitiveness Ranking it is ranked number 25 out of 62 countries, behind Italy and Spain. The growth in productivity over the last 20 years has been low and was 0.07% in 2018.

Interestingly, productivity in industry at $96,000 is still ahead of services at $91,000, as industry is typically more value creating.

So can we conclude that the UK has missed the boat in manufacturing?

Let us look at history and learn some lessons from it.

Famously, the first industrial revolution started in the 1770s in the UK. It was mainly the revolution of clothing with a hundredfold increase in the productivity of spinning and weaving. The invention and development of the steam engine and the subsequent railway boom provided another huge increase in productivity.

While no country could catch up with England, a new industrial revolution developed in the 1870s with the US and later Germany taking the lead: it was the General Purpose Technology of electricity which had the biggest impact. The combustion engine and the invention of chemicals and pharmaceuticals created huge new industries generating historically super high growth in GDP and productivity in the US and Europe from 1920 to 1970.

The third industrial revolution was the IT revolution which started in the 1960s and had a number of distinctive waves: first main frame computers automating repetitive processes and dominated by IBM. The second wave was the Personal Computer complemented by the internet, which enhanced knowledge workers’ productivity and was dominated by Intel, Microsoft, Compaq and HP. The third wave was the rise of e-commerce, now dominated by Amazon and Alibaba. The fourth wave was the portable phone, originally dominated by Blackberry and Nokia, but displaced by smartphones from Apple, the Google Android software, then Samsung, Huawei and others. These smartphones enabled social media, dominated by Facebook, Tencent and others. 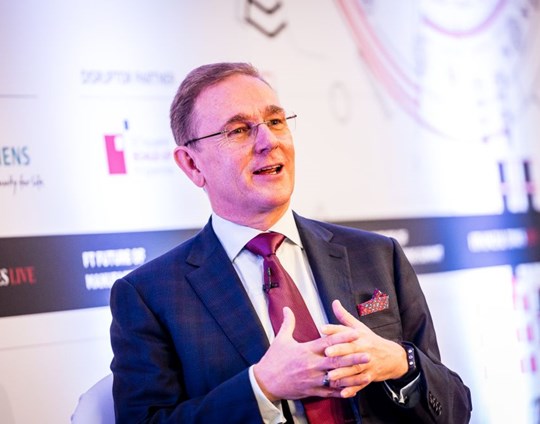 Not only did the leading companies change in each phase, but so did continents and countries. Europe tried to compete in the first waves with names like Siemens-Nixdorf, Bull, Acorn, Amstrad and Nokia. East Asia, notably China, became more prominent in the later phases.

Now we are in wave five, which is Artificial Intelligence (AI). But AI is again a General Purpose Technology with at least four segments and thousands of applications. The segments are

Each segment will have thousands of applications, which will open opportunities for thousands of companies. It is a fact that the likes of Google, Facebook, Amazon and Apple from the US as well as Alibaba, Baidu, Tencent, Huawei, Xiaomi (dt: schiaomi”) or DJI from China have commanding positions - but going forward they will not excel in thousands of different applications.

The UK is the best placed economy in Europe to achieve a global role in the new Digital Age. In the IMD Competitiveness rankings for IT and Digitalisation the UK is - while not top – is still mostly in the top quartile. The UK has research centres like the Turing Institute to ensure top class digital research.

What will be important in this new era is Digital Inclusion: as some technologies will eliminate jobs or enhance requirements for qualification, we must not leave the less well educated behind. All of society must benefit. Only those countries, which will handle the social consequences of digitalisation in an equitable way will be able to thrive.

However, Digitalisation is not the only game changer to provide new opportunities.

Another issue is Sustainability. Those, who can contribute to the fight against CO2 emissions and plastic waste will be given many opportunities.

And finally there is the challenge of the transition from an era of globalisation to a more fragmented world.

So there is no single manufacturing boat which Europe or the UK has missed. Yes, we have missed many boats. But there are many more boats to arrive and leave, with opportunities in digitalisation, sustainability and changing geopolitics.

It is upon us to spot and board these boats.

This is what we need to do: 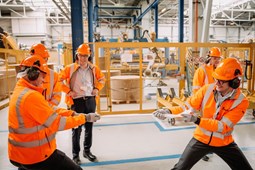 On Wednesday 6 November 2019, Mondi hosted an investor site visit at their world-class Štětí operation in the Czech Republic. Watch the highlights video or take a look at the investor presentation page to view the webcast of the presentations and Q&A to find out more.